HE CAME! HE SAW! HE GUNSLANGED!

Tebowmania is here ladies and gentlemen and may I be the first to say “hot dog hamburger ground turkey!” Forget Lebron, WE ARE ALL WITNESSES TO THE TEBES!*

*First Dowdname of Week 7. And who else deserves it? NO ONE! That’s who, I think. Maybe Christian Ponder? I think maybe him. Ponderific? DOWDNAMED!

Tebow did what Tebow does: played one amazing, miracle, God-driven quarter of good ol’ fashioned, faith based football. #OCCUPYENDZONE! That’s what I’m talking about! I could not handle my excitement watching Timmy Touchdown Tebes move the chains with passes to his receivers knees and 5 yard runs up the gut. It was gritty. It was guile-y.

The best part about Tebow, and I think the reason Tebowmania is as an all time throb right now, is everything he does is a miracle. He causes miracles. He’ll throw it five feet above his receivers heads, causing a miracle catch. He’ll throw it out of bounds, causing the miracle grab and miracle keeping the feet in. He’ll cause the miracle scramble up the guy for a strong 5 yards that keeps the clock moving, thus causing him to get to the line faster for the miracle clock management, causing the miracle use of a crucial timeout in a bad spot. Mir. A. Cles.

Speaking of saviors and Jesus-like icons: CARSON PALMER. One of the greatest trades in recent Dowd-memory has blown up. I thought it was a great move but Palmer whiffed big time. Sure he was a retired, out of shape, formerly elite, far from his prime QB, but maybe it might work. 3 INT’s in one quarter? I applaud his efficiency, but step it up. I think maybe the Raiders are still in the hunt. Possibly. SB winners? Time will send a carrier pigeon.

The glorious .500 accomplishing future of the Raiders

1. Rookies CAN thrive in the NFL. As I’ve always said, the Dowd fears not the rookie QB. I started dozens of rookie QB’s when GM-ing the New Mexico Pueblos. Some say I had a young QB fetish. That couldn’t be further from the truth! My fetishes were always bondage based! My QB’s were always personnel based! Never sexual!* These rooks can sling their little pee-shooters. Ponder, Newton, Dalton, etc! Rook my Amadeus!**

**I used to love that song, now I try to listen to lyrics of a non-sexual nature. Can’t afford the risk. I’m like a sex-hulk, you wouldn’t like when I’m…. yeah. So mostly it’s a lot of light jazz and elevator type music. In fact I have not heard a song with lyrics in over 4 years. One day at a time.

2. The London game is “BRILL!” How can you not love it? We’re sending our boys over to good ol’ Englandtown to rock some real football in their lives. They think they know what football is? PAH! I think we do. Our football has only two players who use their legs, and we HATE THEM! Maybe it’s time we have a full time team in London. Maybe it’s time we have a league there? Has anyone tried an NFL EUROPE? Possibly, but I doubt it. Let’s do it. And then have NFL ASIA, NFL AFRICA, NFL SOUTH AMERICA…. OMIBONKERS! This is like scarfing down twelve different types of turkey at once: maple turkey, slow roasted, honey turkey, dry turkey…. I can’t fit it all in mouth but I know I’d rather choke on this NFL WORLD idea than keep living without.

3. The Colts stink. Possibly the worst team in football. I think they could maybe be contracted they are so bad. Although… they do get a good draft pick and now Peyton Manning back next year. Could they be in the Big Dance de la SuperBowl next year? Maybe. TIME WILL TELL!

Got to gunsling boys. Worst football game I have seen since the Pueblos squeaked out of a 2-0 win back in ’01. We won via a safety after the opposing quarterback accidentally lost the snap and it flew over head through the endzone. Her? That’s right. It was the yearly Arena Football – Lingerie League Holiday Special. We beat those dames! GO PUEBLOS!

5. Rex Ryan’s talk is brilliant. It messes with the opponents psychological psyche. Turns theirs brains into mush. Which is hard to do to someone like Phillip Rivers. Guy could cure cancer, maybe, he’s that smart I think. But they made his brain a pretzel and then bit into it. They ate his brain pretzel! 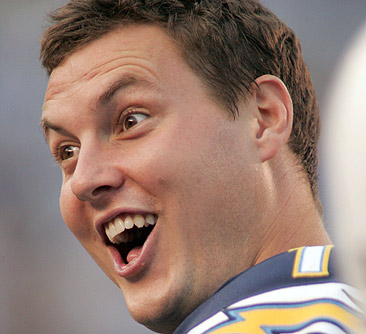 Anyone who makes this guy look stupid is an Einstein

Not sure which was harder: picking the gunslinga or picking the sandwich this champion deserves. I started with a simple slow roasted ham, spinach, dijon mustard on sourdough, but quickly shifted to the darkhorse candidate of roast beef, lettuce, onions, tomato on a sesame seed bagel. Some don’t like it, but others think it is the definition of QB: that’s why we’re going with Tony GOMO Romo over Drew Brees. Gomo’s QB rating was over 107: that is better than 100%! He literally was 7% better than his body allowed. That’s why he gets this sandwich: everything’s bigger in Texas, including my roast beef!

1. Got to be NAWLENS! They whooped the Colts in good ol’ fashioned gunslingin’ Cajun style: GUNCAJUN? I THINK SO!

2. The Broncos. Forget the record, wins are meaningless this time of year. Tebow is here and ready to take them to the Jerusalem of football: the SB! Where Tebow will march in gloriously and be crucified for our sins.

3. Green Bay. Cheeseheads won in a competitive game against the Vikings. They are undefeated and wins mean everything. It is the only stat that matters. They are 7-o. 100% Not s good as GOMO’s QB rating, but still good.

4. The Jets. Their psychological warfare is intense: Rex Ryan napalms opposing coaches with his cruise missile words and Hiroshima imagery. If anyone can cause enough mental holocaust to get to the SB, it’s Rex. I think. But will he use it? Can Rex Ryan be the mental Hitler he’s capable of? Time will tell.

5. DA BEARS. Just saw the SNL sketch with the Bears fans: HYSTERICAL. Dowdlike. I didn’t used to watch anything but football but now I am expanding my viewership. This Saturday Night Live thing is quite the charmer! Very funny stuff. Looking forward to more greatness from them. Is a sandwich award in their future? I think maybe. Is the SuperBowl? I never rule it out.