The New York Yankees off season began early this year and their plan is loud and clear: MORE BIG NAMES. The pinstripes plan on making a “more than generous” offer to anyone they have heard of; you got a name, you’re getting a check.”We’re going to give every free agent $12 million and then we can begin negotiations,” said aggressive GM Brian Cashman. “We want everyone to know we’re going to aggressive on the free agent front. Especially with stars this year.” 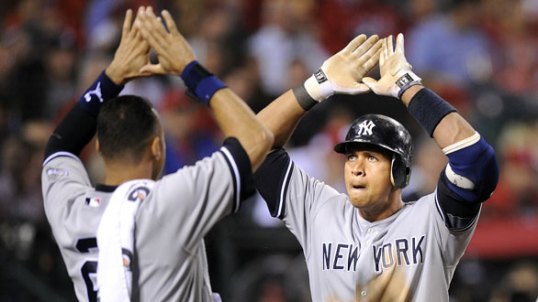 Former rival and possible free agent (he has a club option) David Ortiz woke up Tuesday morning with $40,000 in singles lying in his bed. “All I saw was a pinstriped note saying ‘hey'” cited Ortiz. “It was kinda creepy.”

The Bronx Bombers won’t stop there: Cliff Lee has reportedly told the Yankees every day for the past month that he is not eligible for free agency this year. “We. Don’t. Care,” said president Randy Levine. “Cliff Lee will be a Yankee next season [Levine immediately stared into our reporter’s eyes] whether he likes it or not.”

Pitching is the number one priority for next season, which is why the Yanks have already sent formal offers, $12 million in cash and birthday cake to the homes of Mark Buehrle, Bruce Chen, Edwin Jackson, Rich Harden, Brett Favre and David Beckham.

The recent announcement that the New Jersey Nets NBA franchise is to be renamed the Brooklyn Nets, as per its new home in New York City’s most populous borough, was greeted with celebration by some Brooklyn residents, but elicited groans from others–namely, the borough’s minor-league teams, which find themselves threatened by the recent influx of larger, wealthier organizations.

The starting lineup of the Brooklyn Aviators. Of course you've never heard of them!

“The more rich teams that move here, the higher the rent goes,” said Rob Miller, head coach and president of the Brooklyn Aviators, a local single-A hockey team. “I remember when you could find a decent one-team stadium in Park Slope for under $50 million. The community’s changed so much since then. The sports community, I mean.”

The Nets are not the only major-league franchise setting up shop in the borough. Following the enthusiasm generated by the name change, the New York Knicks announced that they would also be relocating to Brooklyn; Knicks owner James Dolan cited a desire to be somewhere more “authentic” and “down with what’s going on in the street” as having influenced the decision. Meanwhile, the New York Yankees have just settled on a new location in Williamsburg, with sources close to the front office indicating that the neighborhood’s cultural vibrancy is its main draw. General Manager Brian Cashman specifically is said to have been fixated on being in the area “just in case Das Racist ever does that Paul’s Boutique show for real.”

Even the borough’s beloved Dodgers may be returning. That franchise moved to Los Angeles in 1958 in search of mainstream success, but has reportedly found the other members of the NL West to be, like, total airheads.

This has left Brooklyn’s minor-league organizations in a precarious position. The Brooklyn Kings basketball team has already folded under the pressure; its facilities were bought out by the Nets for the purpose of being converted into parking lots for Barclays Center parking attendants.

Many local businesses have found themselves caught up in the area’s transformation as well. Adam Hankewycz, manager of a Dick’s Sporting Goods in Brooklyn Heights, says that he ends up having to stock two classes of equipment: High-end, ultra-sophisticated gear for the majors; and, for the minors, more affordable items, such as leather football caps and Dixie-brand protective paper cups.

The major-league franchises, however, show few signs of being deterred by these issues. When asked about the plight of lower-level teams–and about the possibility that this whole situation could be seen as a ridiculously un-subtle metaphor for the gentrification of Brooklyn as a whole–Nets part-owner Jay-Z dodged the question, offering only an assurance that the borough would, in one form or another, go hard.

After years of dominating on and off the field, the New York Yankees finally admit they are not quite sure why more money does not make players “better.” Owner Hank Steinbrenner, president Randy Levine and GM Brian Cashman stared at one another blankly through a confusing press conference as all three were visibly stunned. “We’ve been doing this a long time and after years of research, we’ve discovered no matter how much money a player receives, he will typically perform as he usually performs. Sometimes better but shockingly, sometimes worse,” said Cashman reading enthusiastically from his report.

I'm telling you, this Betancourt fella is the next Mantle!

Steinbrenner took it a step further: “When you sign a guy to lots of money, that means he is the best ever.” The crowd of reporters nodded to the obviousness. “But we’ve found many players do not excel despite the money they have. Look at Giambi, Burnett. Makes no sense.” Furthermore, there is no solution in sight. “We’re not sure how to remedy this… possibly more money? Or make the money somehow ‘better.'” 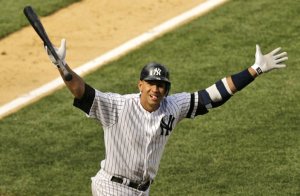 Everyone gets a Hug!

the league and… I’ll just say it, his best days may possibly be behind him.”

The room trembled, shook and grumbled at this last realization.Reporters immediately had questions: “Then why give them that money?” “Are you overvaluing players?” “Everything I once held dear is meaningless!”

The executives tried to calm the crowd by saying their beloved athletes are not overpaid, just exponentially compensated. “They’ll do their best as we lower our expectations and take it all in stri…” Immediately Marcos Ramblin of the Post  threw a Molotov Cocktail screaming: “Who watches the Watchmen!!!”

*Ran out of links