Racing  driver Kyle Busch is livid he could not participate in Saturday’s Kentucky Derby.  I’ll Have Another won the infamous horse racing Saturday afternoon with a furious Busch in attendance.

“See him tailing some of them other horses right ‘fore the end?” screamed Busch.  “If I was on that track he’d regret it, I’d bump him.  That’s racing.  I ain’t afraid to bump a horse with my car.”

Busch arrived at the track with his crew, car and racing tights ready to participate.  The competitor is always willing to race in any event at any time.  Busch is infamous for barging into random men’s rooms and and finish urinating before anyone else already there, regardless of whether they started at the same time.

African American Nascar driver David Thornton was pulled over mid-race during yesterday as he competed for a Sprint Cup Series win.  A police car swerved onto the track, sirens blazing, and pulled over the young man claiming he was “speeding.”  Nascar officials say they always have a police officer on the premises and this should not be a shock.  Thornton protested that he was going “slower than a bunch guys” to no avail. 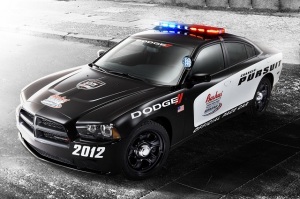 Officer Pimberry's charger made my Dodge; he came in 12th overall bumping himself up 2 spots in the standings.

The officer in question, Clay Pimberry: “Yeah we had a young, African American male, 20-25, speeding away in a car riddled with graffiti and logos speeding somewhere along the lines of 200, 220 miles per hour.  I pulled him over, he was wearing a helmet. I asked him wher ehe bought it. He said he was in a hurry and I asked him to step out of the car and he said he needed 5 or 6 of his ‘crew’ to help him do that. That’s when I requested backup.”

Thornton spent the evening in prison and his car was towed.  He will dropped 3 spots in the standings.

Last night Daytona was ablaze with Nascar excitement and literally flaming trucks of gasoline.  Officials feared the rain delay and death-flame truck would mar Nascar’s Oscars, the Daytona 500, but it did just the opposite: ratings skyrocketed.

“The thick rain followed by ferocious fiery beasts made us realize this is the perfect way to watch Nascar,” said president Mike Helton.  “We will explore the use of dragons, griffins and any mythical fiery beast to give the fans what they want.” 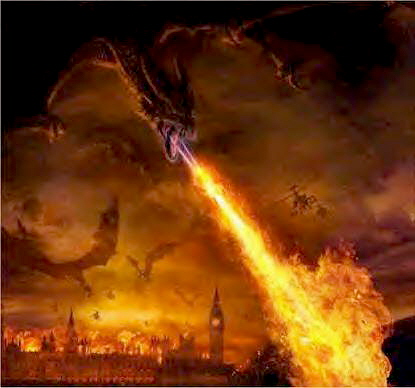 Critics of Nascar claim the sport needs to be less like rednecks driving in circles and more like Mario-Kart.  Others suggesting a podracing, George Lucas-style approach, but then everyone laughed because that would a horrible fucking idea.

Nascar officials have already sent out scouts and search parties to gather the dragons.  The plan is to incorporate the animals as early as 2013, however, the parties do not return for many moons. 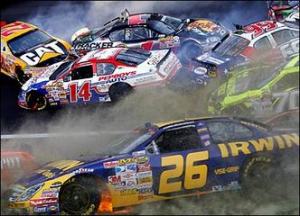 Retired Nascar legend Bo Crastins has been arrested for drag racing late last night in his motorized wheelchair. Crastins, the all time leader in intentional crashes, is in a Fullerton, Tennessee prison and is expecting to post bail this morning. “It’s a shame,” says champion Kyle Busch. “A guy like that was so competitive. If you ever passed him or nudged him he’d straight up drive into you. Good to see he’s still racing though.” “He was not just some guy,” says driver Tony Stewart. “He was one of the all time greats.”

Crastins was known for his hard nosed attitude and willingness to crash into walls, cars and in one 1982 incident, the opponent’s pit crew, in order to win. “Still not sure how he thought he’d win after crashing into the current winner,” says former team owner Dusty Caldwell. “It just means someone else will take the lead. But Bo never worried about that.”

Crastins had a hard time after Nascar. He was arrested numerous times for speeding while driving his kids to school in a minivan and repeatedly pestering neighbors by foot racing their dogs during afternoon strolls.

In 1998, however, tragedy struck: Crastins, in yet another race related accident involving a segway scooter and Hummer, was paralyzed.* But a true racer never stops. Crastins took to his motorized wheelchair with the same reckless abandon of everything else, crashing into super market patrons, women in parking lots and going down steeps hills in pure ecstasy. 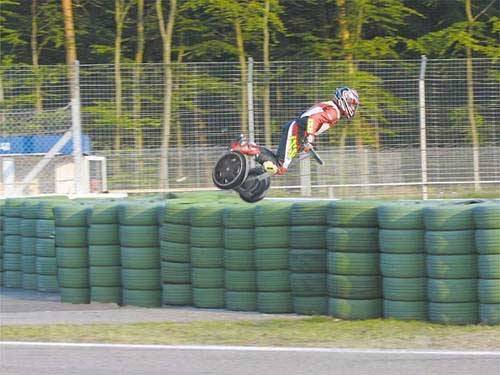 UPDATE: Bo Crastins has fled prison and is currently in a high speed chase on a local highway. Several police cars are trying to catch up to his wheelchair.

*Yes. Bo Crastins thought he could beat a Hummer in a segway scooter. Almost did before he crashed into it.