Shaquille O’Neal’s new book, Shaq Uncut: My Story, is already rife with controversy. The book features harsh criticisms of former teammate Kobe Bryant, former coach Kareem Abdul Jabbar and Pat Riley. However, the biggest shock comes from the book itself; Shaq uses numerous big boy sentences throughout. It is a stunning revelation in the world of the Shaqtus, long thought to be illiterate.

“I made it through dozens of paragraphs,” said Barnes and Noble shopper Kelly Brockton. “It’s not perfect, but the man used verbs, adjectives and even a compound sentence. Hall of famer right there.”

Many are attributing the proper grammar and diverse vocab to writer Jackie MacMullan. However, in the last chapter Shaq reveals a feud he had with her as well.

All in all, another accomplishment for the Big Aristotle.

“When I balled in Miami, FLOR, coach Pat wasnt good or helpful. Somestime I didn’t like him. Other times I did. I was contemptual to say the least.”

“Kobe had sex with a lady and not goodness happened. Hurt team. We say ‘Kobe I Shaq, shall help you if you’ll bequeath me.’ Turns out I was the one doing the bequetheathing.

And what beautiful word pictures they are. 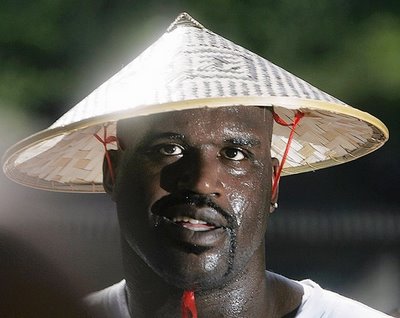 OMG is she eating a chili dog yum yum yay!

The 50-50 revenue split is still up in the air, but This Is The Sports has learned of another lockout hold up: both sides are stretching the lockout to keep retired, future Hall of Famer Shaquille O’Neal off of television. The Shaqtus signed a TV contract with TNT to be apart of the same crew as Kenny Smith and Charles Barkely; the players are saying “no thanks.” The owners, however, are not happy with the current model of Smith and Barkely coverage. Supporters claim the owners want to even the commentary, while detractors say NBA commissioner David Stern is merely trying to put his stamp on the pre and post game stupidity.

Barkely, the king of the current booth, is absolutely upset at The Diesel’s arrival. His rant on the subject was inaudible, unfortunately. The Big Shamrock responded to Barkely’s comments… also inaudible. But the mumbling was disgruntled…. or sarcastically disgruntled. I think.

Both were used as examples why Barkely and Shaqovic cannot be apart of the pre and post game discussions. However, both Charles and The Big Aristotle broke into a 12 minute discussion of the McRib sandwich which was absolutely hysterical.

The lockout continues to twist and turn.

Now imagine if Shaq Fu was sitting next to Kenny. Shutter….