The Artist is the winner of Best Picture at Academy Awards LXXXIV! 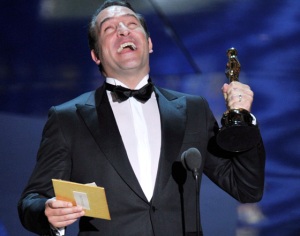 After being down at the half, producer Harvey Weinstein gave a rallying speech to eventual Best Director Michael Hanagdjsnsdkfbdh and Best Actor winner Jean DuJardin, the rest is history.  Hanhgdjnshdjd made a miraculous performance late in the game against heavyweights Martin Scorsese (movies’ Vince Lombardi), Woody Allen (movies’ Ditka) and Terrence Malick (the mumbling disgruntled Belichik).  No one thought such a throwback team could win the big dance, but without a conventional team on the map, The Artist took it home during the ensuing free for all.

Continuing the win was DuJardin, Hnagdhsjsbs’s teammate on The Artist.  DuJardin miraculously got this far in the rankings* despite speaking only two words in his film; a brilliant display of game managing and little showboating.  His win was all but secure: regular titans George Clooney (movies’ Tom Brady) brought his A game by appealing to straight and gay backings with some delicious arm candy at the start of the game and a beautiful man on man kiss with host Billy ‘The Kid’ Crystal early in the game; a shocking move not seen since Clint Eastwood arrived grimacing with a handgun in 1992.

*I know, we need a playoff.

DuJardin’s other top contendor was Brad Pitt (movies’ Tom Brady) whose Moneyball, a film about the Oakland Athletics, had a strong regular season but faltered quickly in the playoffs.  The Frenchman stood firm and smiled throughout Crystal’s painful, gun wrenching jokes and mugging in order to give an emotional and screamy acceptance speech, the way a champion only can.

In the woman’s… ah who cares no one watches them anyway.

The Artist winning the Best Picture certainly was not shocking, but was it the Best Picture this year?  On an even cinema in Kansas would it win 9 times out of 10?  5 out of 10?  We’ll never know.  Unless we actually count the wins from the Independent Spirit Awards, Golden Globes, SAG Awards, WGA Awards, LA Film Festival, Cannes, Producers Guild, etc.

New England Patriots quarterback Tom Brady said yesterday’s Super Bowl loss was “the worst thing to ever happen to me.  Yesterday was the worst day of my life.”  The somber, future Hall of Famer looked depressed lying in the arms of superstar model Gisele Bundchen, his wife.

"Nothing good has ever happened to me"

Gisele claims she has never seen her husband this upset.  She suggested going for a hunt, a healthy breakfast of mythical dragon eggs or just distracting himself by going to his secret meeting of people who decide world affairs; nothing could make Brady feel better.  “I just want to lie on my dream bed and take a nice vacation to my space station… I mean, lake house.”

Numerous disappointed Patriots emptying their lockers paused to see how helpless and broken their QB looked as Madonna’s Roman soldier legion helped carry him out.  Brady fought hard though, that’s all you can ask for in your millionaire-playboy-hall of fame quarterback.

Everyone on that team will suffer equal hardship tonight. 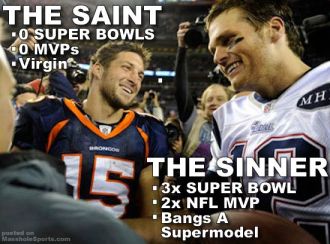 In an odd scene outside the Denver Broncos practice facility, Denver quarterback Tim Tebow met with the press upbeat and ready for his upcoming playoff game against the New England Patriots.  “You dream about these games all your life and when you get the chance to play in them, you just want to go out there and give it your all,” said a smiling Tebow.  When asked about the Broncos 45-10 loss against New England this past weekend, Tebow appeared to be confused, “Coach Fox said that was just a scrimmage.  And good thing it was; I played pretty awful in it.  We’ll shake it off and get ready to make some adjustments for when we get them again this weekend.”

“Honestly, management felt it was best if Tim didn’t know that we got knocked out of the playoffs,” said Denver Head Coach, John Fox, “We were afraid that if he lost, there could be a chance of him denouncing his religion, getting into meth and crack, and being found somewhere dead, with hookers, or with dead hookers.  The NFL has a great star in Tim Tebow; we didn’t want to be the reason for his supernova.”

“Tom Brady is a great QB, but I feel like that I’m just as good on the football field,” continued Tebow when asked about the Patriots, “I mean, when you watch Sportscenter, they show highlights of me all the time.  That has to tell you something about my football playing ability.”  Broncos owner and former player John Elway will be giving the annual state of franchise speech this Wednesday.  When asked about the Tebow playoff contingency plan, Elway was vague in his answer.  “Right now, we’re going to try and keep Tim in the film room preparing for this weekend.  We have some ideas for how to approach the situation: telling him that Jesus won the Superbowl, telling him that the Superbowl was cancelled and every NFL team will do community service, using a neuralyzer and creating a new memory for him.  Whatever we do, it’s in the best interest of the league to make sure he doesn’t find out that he sucks.” 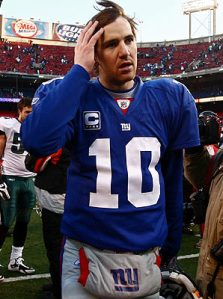 “It’s not what the options are that matters, it’s that Eli recognizes he can do many different things,” said a damage controlling Coughlin. “We worked all off season on writing down ideas that help, rather than using his brain.”

Fans were not happy though, that Eli even included two horrific decisions, but again, Coughlin stood by his QB: “Its option four! FOUR! Would you rather it be higher? It’s not 2010 anymore!”

Eli left the wrist band in the shower. Usually Manning never removes the band, as on the back it features detailed instructions on how to get home, his weekly grocery list and his social security number. 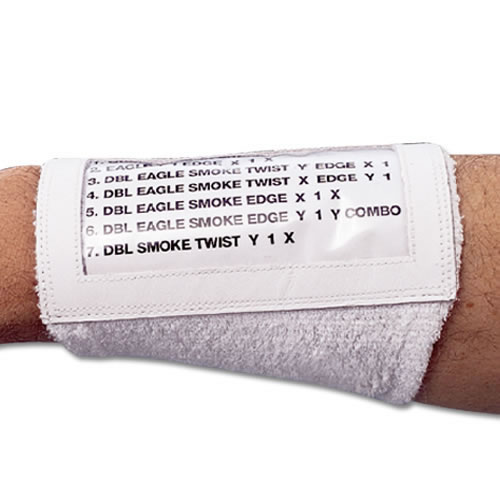 “We should hang out sometime.”

Five words changed the course of Boston social history.  Cripplingly shy growing up, Pats QB Tom Brady still hadn’t totally shaken the crimson mumblies after being catapulted to stardom.  The young star figured his newfound fame would lead women to him, and resolved to go out with the first woman who asked.  But for a very long time, no one did.

Through countless off-season merchandise signings and public appearances,* Tom waited for someone to ask if he wanted to go to visit the library, or take a walk through the Common, or just ask what he was doing that weekend. “Whenever I’d catch a woman looking at me, she’d freeze and look away, or shriek and start texting on her phone, or yell ‘I LOVE YOU TOM!’ and then duck behind her friends.  No one asked me to come over to their table or join them or anything.”  As Brady spoke, he looked wistfully off into the distance.

“When they started asking for pictures with me, I’m like ‘alright, here we go,’ but then they’d just take the picture, smile, and scamper away.”  His relationship with actress Bridget Moynihan, friends say, began while both were milling around the snack table at a mutual friend’s get together.  “She held up a bowl of dried fruit and said ‘want a date?'” a member of Moynihan’s inner circle said.  “By the time she realized the misunderstanding, she was like, ‘what’s the worst that could happen?'”

But one false start does not a drive destroy.  A few months after Tom and Bridget parted ways, the signal-caller was milling about a high-society L.A. shindig when a tall blonde tapped him on the shoulder.  “I saw this amazing pair of eyes.  Time slowed down.  Then she opens her mouth and says…have you seen my phone?”

Gisele blushes at the memory. “I had it out when I was sitting down, and left it there when I got up.  That spot ended up being Tom’s party perch,” she says.  Brady handed the phone back, and Gisele thanked him.  She turned to leave, but then, on a whim, turned and uttered the phrase that launched a thousand headlines.  “We should hang out sometime.”

After asking if she was sure, Brady gleefully accepted.  Months later, when he told her about his promise to himself, she was stunned.  “I guess she was the only one with the oves to walk up and ask,” he says with a shrug.  “The day after we met I was out walking, and this girl at a stoplight sticks her head out the window of her car and yells ‘Marry me, Tom!’ and I said to myself, ‘damn. If you had asked yesterday, you’d be my fiancee right now.'”